After a hiatus of some years, I’ve rejoined an 11-months-long monthly decorative envelope exchange. I’m enjoying it. We aren’t required to include anything calligraphic in the envelope — although we do have to include something. I’m putting calligraphy in mine. 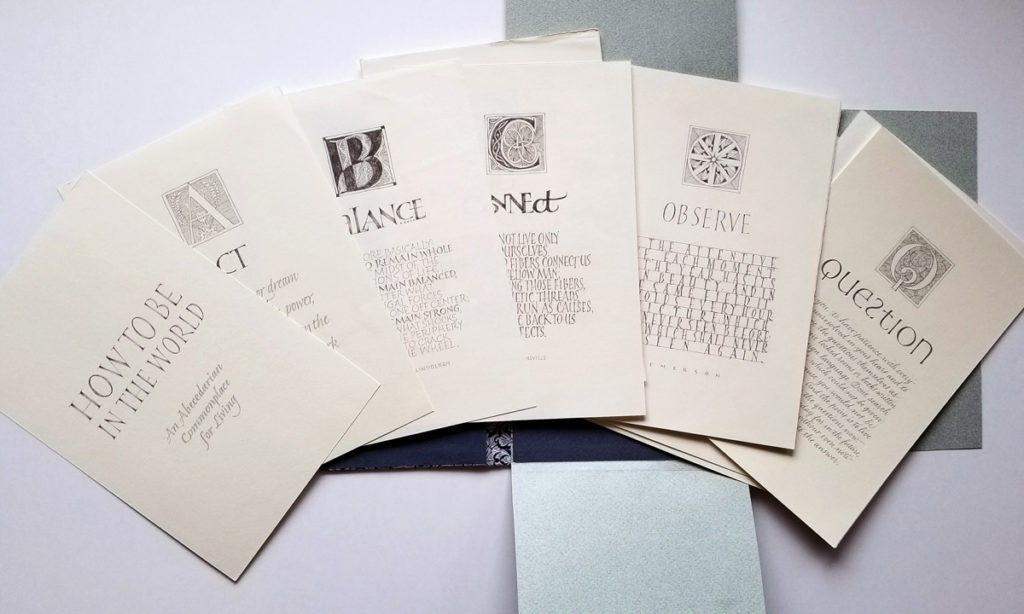 It’s been a hectic month, but I’m hoping to get back to this soon. Latter portions of the alphabet have been neglected for too long.

Back in my studio, I’m pleased to have most of my gear unpacked, and the spilled ink cleaned up. And I’m also pleased to get back to a daily lettering practice. In the conference goody bag was a General’s Sketch & Wash Pencil No. 588. When I was unpacking, it caught my eye, so I lettered a page of Strathmore Drawing 400 using it. Then I went back in with a Pentel water brush to see what would happen. I’ll probably do more on it later, but right now the kitchen is calling … 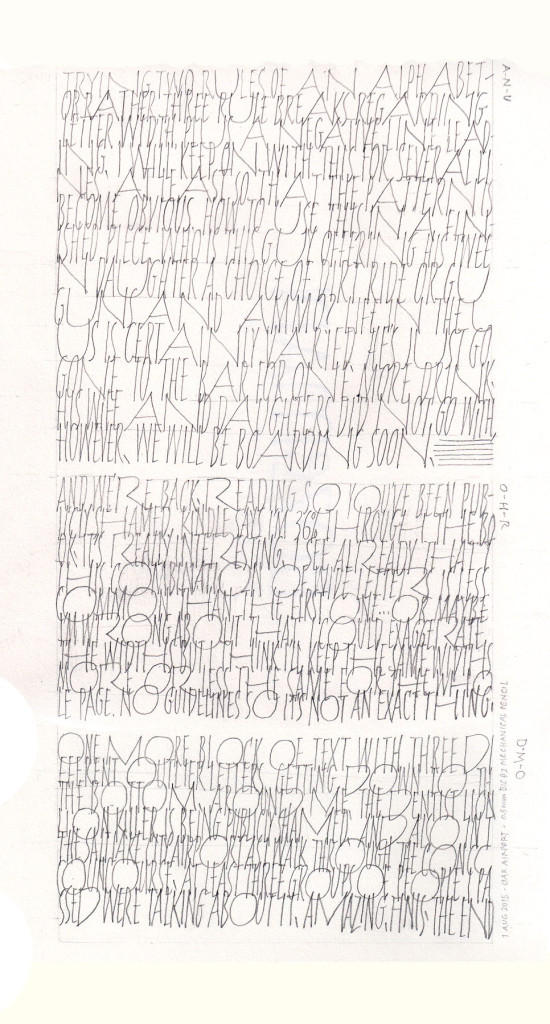 Yesterday I returned from The Passionate Pen in Sonoma County, California. It was a wonderful week seeing old friends and new work, experimenting with new ideas, tools and materials. I was surprised to find myself working with a pointed brush most of the week. I’ll post more about the conference in the days to come, but today I’ll share the page I did in the Oakland airport and on the plane to Salt Lake City. I learned more about “form themes” in Ewan Clayton’s four-day workshop, especially during the study of Hans-Joachim Burgert’s work. On this page, my form theme includes condensed capitals, line leading that is smaller than the height of the letters, and three rogue letters that are not condensed. The choice of three letters changes in each of the three blocks. It was a good way to spend the hours in the airport coming down from the conference.

A couple of weeks ago I attended an inspiring workshop taught by Peter Thornton in Missoula. If I take enough workshops with Peter, perhaps eventually most of what he teaches will actually sink in. It’s all so valuable, and seeing his manuscript books was especially inspiring. This weekend I digested a little more of his teaching about layout, especially as it relates to the Fibonacci series.

Here’s a piece I did in the workshop. The abstract word is “Chaos”. I meant to write this quote on one of the of the sheets that had the word “Doubt” on it, but I guess chaos often relates to doubt. I have yet to attribute the quotation, which belongs to Richard Feynman. Another layout decision, you know. The entire quotation reads:

An apposite quotation for a workshop, I think. 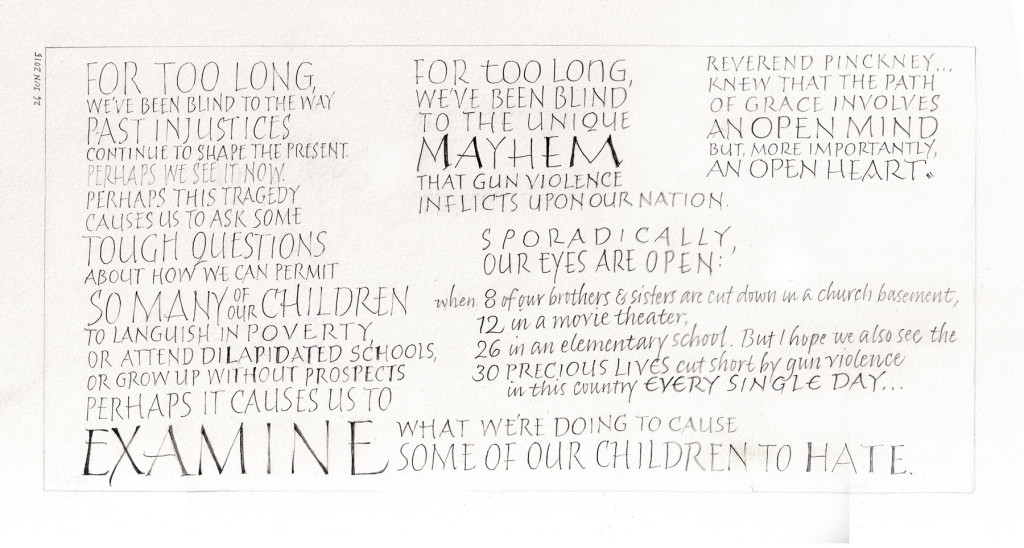 Today was a big day in US public life, for at least three reasons. First, the Supreme Court upheld the Affordable Health Care Act in King v. Burwell. Second, it also upheld the right to same-sex marriage in all 50 states. And third, President Obama eulogized Reverend Pinckney, who was gunned down in his church in South Carolina last week.

Today’s daily lettering was a meditation on this inspiring eulogy. I could call it an exercise in improvisational layout, or practicing pencil Roman capitals and pressurizing down strokes. But I often forgot these technicalities while absorbing the text.

All that bicycling in Crete took its toll on my back, but I’ve been soldiering on – most days – on the homework for Peter Thornton’s workshop in Missoula this coming weekend.

Last Friday, page 18: Experimenting with changes in orientation, size, spontaneous layout. (I had to do something about that the horrendously large space in the O, which could have been fixed by wider letter spacing or a narrower O … but wasn’t.)  Page 19, done on Friday and Saturday, was an attempt to keep the three main width groups of Romans but condense them all by about 25%. Not a success, except that I learned that it would probably be better to move toward a more consistent letter width at that level of compression. None of the following work: condensation, condensing, condensement.

Yesterday, page 20: I dispensed with guidelines and line leading, experimenting with variations in orientation and size, and trying to get the spaces to “talk” to one another.

Laboring onward, I got a little off track about line 7 of page 14, but I ended up at the bottom of page 15 back at just monoline Roman capitals with a little pressure and release. I’m ready to break out of the lines soon. Maybe.

These letters are slowly seeping into my kinetic memory. Spacing is still problematic (story of my life), and 3 o’clock to 6 o’clock on O, Q, C, G, D is just not happening with any regularity at all. That area of the circle is like trying to scratch the itch between my shoulder blades: I can get there, but not natural and it’s not elegant.

Daily lettering – homework in preparation for a workshop with Peter Thornton later this month. Nothing like Roman capitals to make you feel like a child again. Day 6, page 9, progress … maybe.
Strathmore Drawing 400 paper (80#), 4B pencil, 1/2″ height. I started the homework at 1″ height for a few pages, moved to 3/4″ height for a few more pages, and this is the first page done at 1/2″ height.