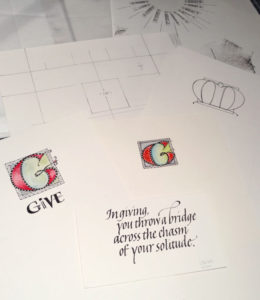 I’m finally getting serious about working on the project our local guild is doing.

I’ve decided to do the same layout for all 26 sheets, which are 6″ x 9″. I’ll have an illuminated modern versal in/on a 1-1/4″ square, a word below that in an idiosyncratic hand, and then a quote. It will be an abecedary of words that remind me How to Be in the World. That will be the title.

The smaller G was done at a guild meeting in which Diana taught this illuminated letter style, but it’s not quite centered, and not quite as large as I wanted the letters to be. So I re-did the letter, but used bristol vellum board and Derwent Inktense pencils (and water). I’m going to re-do this letter again, this time on hot-pressed watercolor paper and Schmincke gouache, which is what I used the first time.

Then (maybe) I’ll be off and running.

The M further back was in process, but on bristol board, so I’ll be scrapping that – at least for this project. The sheet beneath is my template which will provide a consistent structure for all the pages.