Someone stop me. No, not really. Well, maybe.

I’ve now done several alphabets in Z-to-A order. The third image is one of those. It is about focus to some extent. I find it easier to be more even* when I work up, and it’s interesting how the questions of space change when I’m going in the opposite direction.

*By “even”, I mean that my focus and tempo and looseness tend stay more constant throughout. This third image is a poor example of that, but as a rule, this evenness is more pronounced when I start at the end.

As always, click on the images for a closer look. 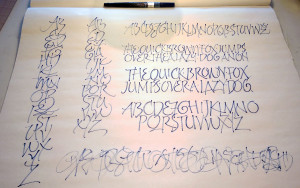 It’s really quite addictive. I’m not sure what I’m going to do with, but it’s absorbing.

At the annual calligraphy conference held this year in Sonoma County last month, I was honored to attend Ewan Clayton’s four-day workshop entitled “The Spirit of Invention”. We looked at new directions which several German calligraphers took after World War II. One of these calligraphers, Werner Schneider, explored handwriting and gestural mark-making.

We were introduced to an image of a gesturally made “ABC”, and every morning we began with a page or more of the same, first copying that gesture and then branching out on our own, changing the gesture and/or adding more letters.

As we repeated the exercise each morning of the workshop, I was interested to see not just kinetic memory development but a change in my own awareness of what I was doing. Here’s one example: I would make the A and the B and then change my position to make the C. I was totally unaware of this until Ewan pointed it out to me. Something I figured out on my own, later: I was losing focus at the end of the C.

Back home, I’ve continued the practice, spurred by the purchase of a 100-sheet roll of packing paper at Home Depot for $4.97. A few days later I realized that I had an 18″ x 24″ pad of newsprint that would serve even better, especially in keeping the pages in order. (I’m working from the back of the pad of paper to the front.) Every once in awhile I’ll switch to better paper. I’ve used a number of tools: the Winsor Newton 7 Series brush that I used for most of the exercises during the workshop, a blue slick-rolling pen that was in our conference goody back, a couple of Pentel Color Brushes.

I’m learning a lot, but most of it is difficult to communicate.