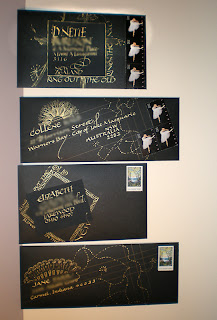 Here are the 4 envelopes I mailed yesterday for the Black Tie Exchange over at the Yahoo group, Calligraphy Exchange. The rules: Use a black envelope and either white or gold "ink" address in calligraphy.

I made my envelopes out of Strathmore Artagain black paper -- comes in a 9" x 12" pad. The two insert square are on Arches cover black, I think. I used my favorite gold ink -- Dr. Martin's Copper Plate Gold.

Names and addresses blurred to protect the innocent.

This business of catching up after a trip is the pits. I'm close to being caught up. Here's a broadside and book for a client -- same quote for each. The inset in the 2nd photo shows the book closed.

I've been addressing invitations, and using hot glue and cardboard, but it seems like I haven't dealt with paint lately -- although that's not true, now that I think about it (I may post my Gandhi drawing later). Anyway, for whatever reason, I've been making beginner mistakes with paint -- getting it on my hands, in my hair, without realizing it ... generally being covered in paint for no good reason. Makes me feel kind of like a kid, though. That's not bad.

As usual, click on the thumbnails for a closer look.

A quick, cold, unretouched (except that I Photoshopped out the smudges made when I slapped it down on the scanner glass before it was dry) fake address in my current pointed pen script. My website is so out of date, even this quick one is a better sample.

I've been away on an of-my-gosh-school's-about-to-start-and- we've-got-one-more-opportunity-for-a family trip. Now I'm working on addressing wedding invitations. Here's a bit from the invitation itself:

Although I first thought I'd use a pointed-pen script for the addresses, after struggling through a few envelopes I quickly bowed to the necessities of the materials. The paper proved to be way too toothy and not at all sized enough to allow the use of a pointed pen.

I could include a rant here about wedding stationers and their high-priced unwritable stock -- even Crane has been known to make their envelopes inside-out at times, so that the sizing is on the useless inside of the envelope. Oh, the torture of having the beautiful side of the paper so close and yet so far away. It's like a tying up a horse within 5 inches' reach of water. All right, all right, I've just deleted the rest of this rant. Calligraphers know exactly whereof I speak, and the rest of you can only imagine our pain.

After I concluded that pointed pen was impossible for these envelopes, I started experimenting with a #5 Mitchell Roundhand nib -- a narrow broad-edge nib -- and tailored a script that I think complements the script above. Here it is (as always, click on the thumbnail for a closer view): 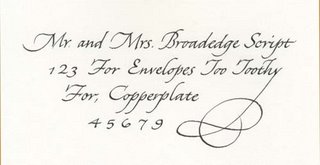 Then I modified the capitals to follow Copperplate forms a little more closely. See the B, the T's and the F's. This modification worked because the capitals are so tall: 11 pen-widths.

And, voila! I like this script. I think I'll add it to my standard style offerings. 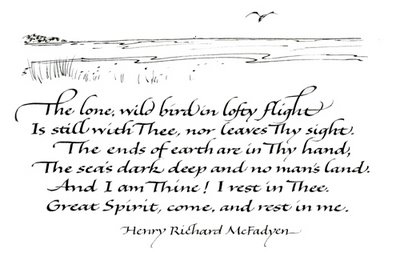 I've been trying to draw some more. ("More" is not a difficult accomplishment when it follows a period of "none"!) Since I'm primarily a calligrapher, the drawing inevitably leads to the question of how to combine letters and drawings on the page.

The integration of image and text in Oriental calligraphy is not the same problem it is in Western calligraphy. While Chinese characters, for instance, were once pictures, our Western letters are symbols of sounds. So there's a jump from image to sound in Western language that doesn't happen in languages whose characters began as pictograms.

The "windows" solution is illustrated (haha) throughout countless medieval manuscripts, in which rectangular frames and the counters of decorated capitals often act as a two-dimensional frame for a three-dimensional scene which exists on the page in another visual plane.

Over a hundred years ago, William Morris concerned himself with the integration of text and image through his work at his Kelmscott Press, designing type, decorative initials and woodcut borders to work together. So did others in the Arts & Crafts Movement.

The current fad for combining words and images is to simply layer them willy-nilly over and amongst and between one another. I believe this is both a reaction to, and a symptom of, our information-crowded lives. It's not efficacious for me, except perhaps as a means of letting off steam. I've over-simplified the situation: I have seen layered work that is stunning and meaningful. But I've seen more that can be described as a chaotic mess.

I've started a black-and-white (so far) art journal recently. I've been working in it every day (so far). Here's the 3rd page of it, which is mostly an attempt to integrate image and text by using the same tool for both. Another goal of this page was to work on a wider, flowing-but-not-too-sweet italic variation. 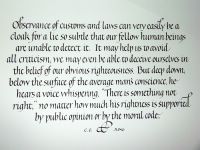 So often I get calls for calligraphy which has to be crammed into a space that is sometimes smaller than the typewritten original. It's very frustrating. But this quote was required to fit a space at least 23" tall by 32" wide. So the x-height of these letters is 5/8". What luxury! (That's not a wrinkle at the top right, but a shadow from an open door. I set the piece on the floor and leaned over it to take the photo.)