We're starting an interesting project in my web design class. Groups of 4 people get together and agree on a basic narrative story and then each contribute 5 images that connect to the story. Then each person creates a website using the narrative and at least 1 image from each person in the group. 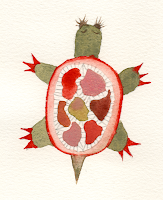 Here are 4 of the images I'm sharing. I have no idea what the others will contribute; I hope these will work. The lettering looks so much better than it would have before I'd worked with lettering in Illustrator. I'm pleased with it. 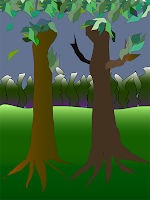 This last image is my very first attempt (well, 2nd, but I had to trash the first one because of a basic minunderstanding about paths) to make a drawing in Adobe Illustrator. I've done quite a lot now with type and converted images, but had never started from scratch to make an image in Illustrator. It's a weird result, but I'm pleased that I was actually able to accomplish it.
As usual, click on the thumbnails for a closer view.