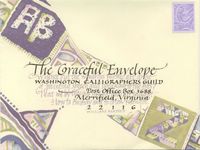 Well, I've just managed to squeeze in one post in March. Barely. This is the envelope I sent off a few minutes ago for The Graceful Envelope contest. Not a particularly inspired contribution, but it is very good to be doing something calligraphic after such a long time. A family health crisis has kept me out of the studio, but I expect April to finally be a return to life as usual. If there's any such thing as "life as usual".

No time for a new Friday Illustration this week, but I wanted to send something. I did this for a band fundraiser auction a couple of years ago. The counters in the word "music" were cut away to reveal paste-painted paper behind.

Click on the title of this post to visit an excellent source of information about the bookbinding structures found in the collection Dunhuang and other Silk Road manuscripts housed in the British Library. The information at this website is both extensive and well illustrated with both photographs and diagrams. 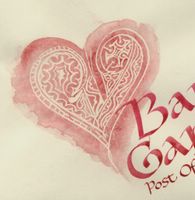 Here's the decorative bit of my submission for the Hearty Envelope Exchange at the Calligraphy Exchange list on Yahoo. Done with liquid frisket and watercolor on an extra envelope left over from a wedding job. The linework is taken from standard figurative motifs in medieval illuminations. 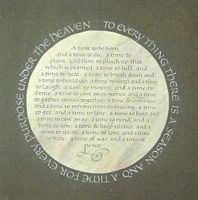 This art exhibit, organized by the University of North Texas Art Gallery, is currently on display at Carleton College. Surprisingly, I hadn't heard anything about this exhibit through the book arts channels. Instead, I read about it in this post on the blog Across the Great Divide. While there are plenty of images at this Carleton College link,the blog post provides some interesting background information on Mohammed Al Shammarey, one of the artists, as well as a link to his own gallery.

Here in Tallahassee, where the book arts are not exactly thriving, it's easy to become disheartened. I am fortunate to have one friend, at least, who understands my preoccupation with serifs, ligatures, spacing, and the myriad concerns of the book arts.

When I begin to think that the long hours spent practicing my ABCs might simply be an unsupportable self-indulgence, I take a break and stroll through the virtual galleries of some of the best contemporary lettering artists.

John Stevens is one of the lettering artists I revere most. Before I tell you why, I should explain that I was a musician before I was a calligrapher, and over the years I've amused myself by matching various well-known calligraphers to famous composers and musicians.

I think of John Stevens as the Arthur Rubenstein of calligraphy. Both Stevens and Rubenstein share an expressiveness underpinned by impeccable technical fluency. And both have brought to their work a clarity of vision which combines breadth of perspective with attention to detail. The results have been fresh, contemporary interpretations which keep the best of historical forms without slavishly copying them.

His piece entitled Namaste is an example of these qualities: the spontaneity and expressiveness of the brush-lettered italic word belies the painstaking carving and gilding that followed.

I wander through galleries such as this, and return to my lettering inspired. And I ponder Rollo May's question: "What if imagination and art are not frosting at all, but the fountainhead of human experience?" 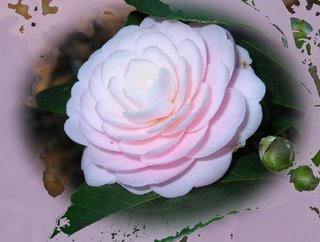 If I really knew what I was doing in Photoshop, I could tell you how I did this. Something to do with the elliptical marquee, inverse selection and fill using a color from the camellia. I'm not sure why the fill didn't get everything outside the marquee, but I like the effect. 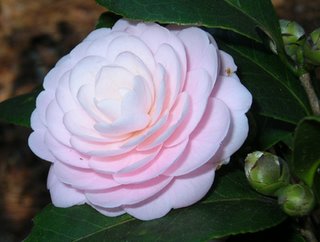 I uploaded the first image of the tulip magnolia using Picasa, and a border appeared. I'll try the direct route here.\
Well, "kind of" no border. As if the emperor were wearing clothes.

Trying out the Magic Wand in Photoshop again -- this time on a tulip magnolia bloom, with a background like the blog background.