I did this a few days ago, lost it, and just found it again today. More abstraction of the letter forms I’ve been using from Hans-Joachim Burgert’s book. 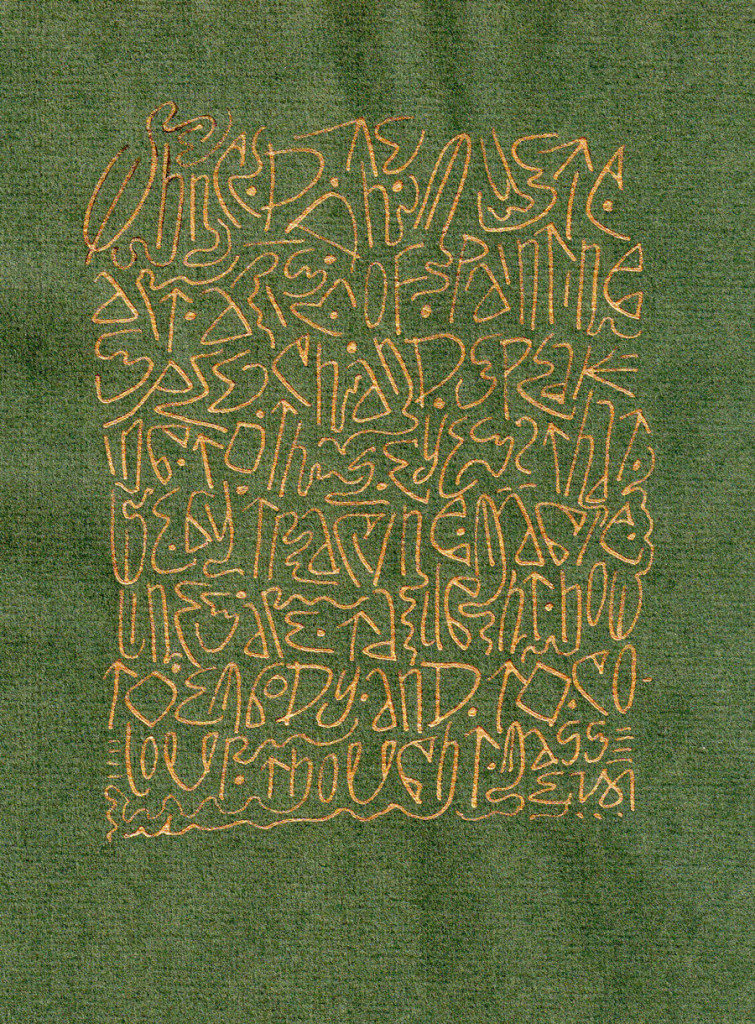 This is fairly small, a sheet torn from a 6″ x 8.5″  book of Canson Mi-Tientes paper, done with Luna metallic watercolors and a #6 Mitchell nib, I think. 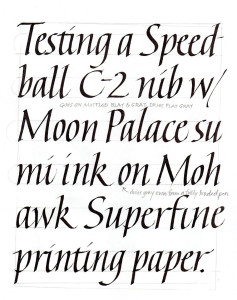 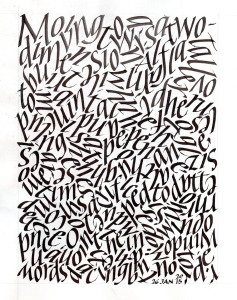 Continuing the abstraction, but changing the line by using a new tool: a brush. Looking at this again, I see that abstraction doesn’t want to stay. I seem to have drifted back towards legibility a little. 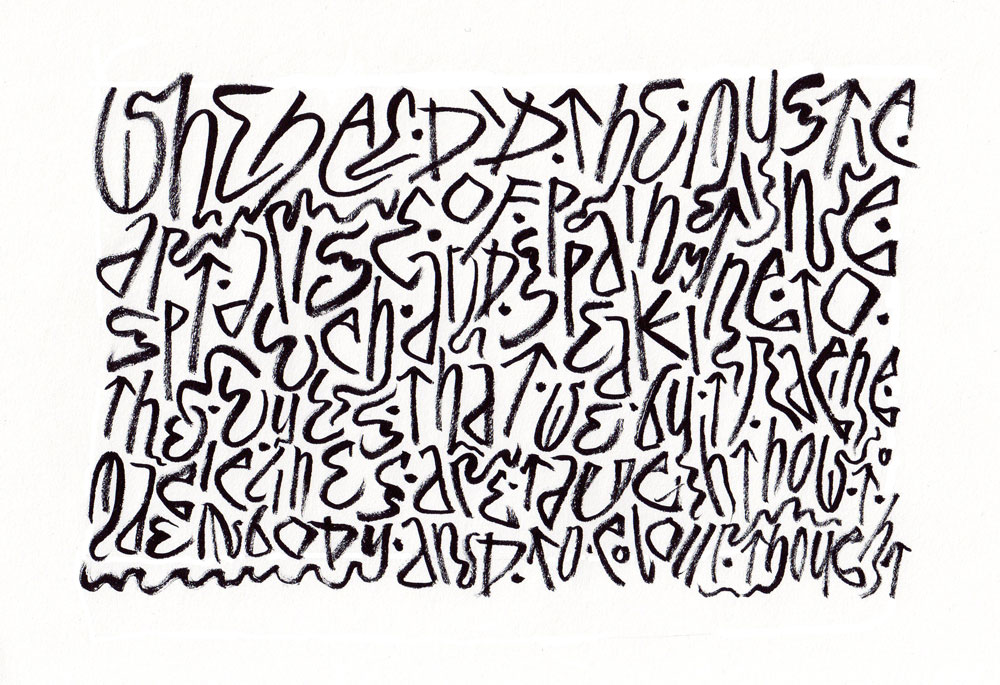 Now’s it more work — not work, but play, difficult play. And a nice change from the italic exemplar over which I slaved most of today. There is nothing like making an exemplar to point up all the ways my lettering falls short! 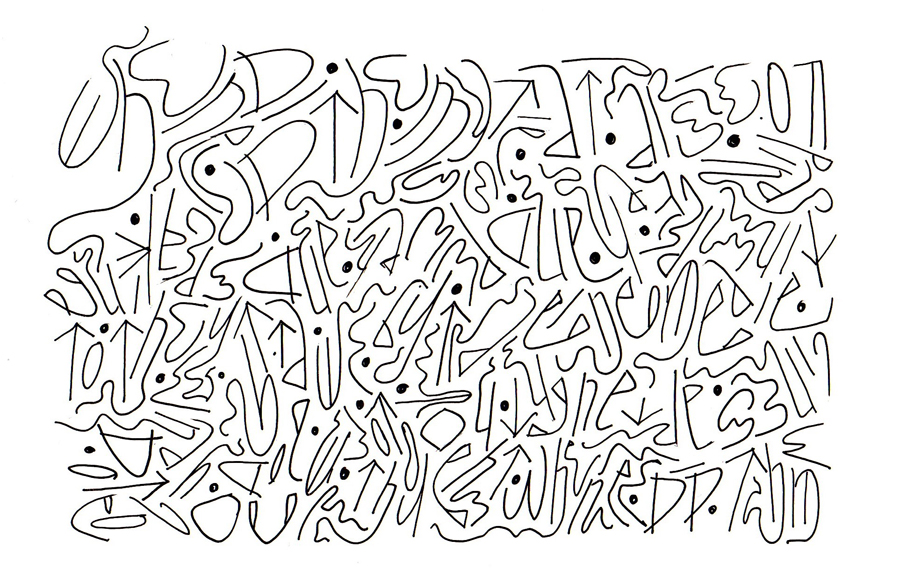 I’m tempted to start again with another set of formal letters, but I may move on.

I’ve been continuing to re-read Burgert’s book,  The Calligraphic Line. At the beginning, he writes that calligraphy is two-dimensional design using a limited set of symbols with a limiting set of rules. He discusses the spectrum of legibility  -> abstract 2D design, and the concomitant spectrum of typography -> fine art. (Or something like that; I don’t have the book in front of me.) 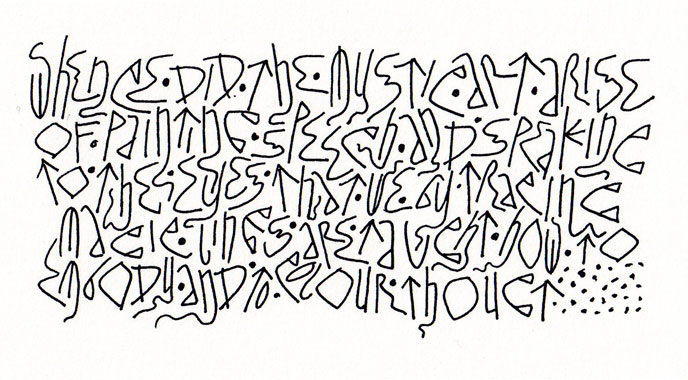 , but was surprised at how little I had moved along the typography/abstraction spectrum between lettering 2 and lettering 3. So far, it’s fairly easy, so I probably haven’t gone far enough yet. 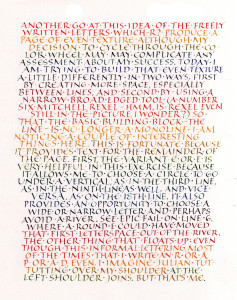 I had planned to write about Irene Wellington today, but I’m still back at that page of even texture that Hans-Joachim Burgert discusses in The Calligraphic Line. I tried it again today. I have things to say about it, but most of it is on the page itself, so why repeat myself? If you want to read it, click on the image to get a larger image.

I did try to have a more open texture than yesterday, but as I progressed down the page I reverted to my “default” density, I guess. Something to work on. There’s always something to work on.  There are always multiple  things to work on. I was particularly aware of the left shoulders of letters like R, P, and D.

This 9″ x 12″ page (IRL the margins are somewhat larger) was BK Rives Heavyweight, which is rather grainy, especially at an x-height of something less than 1/4 inch. 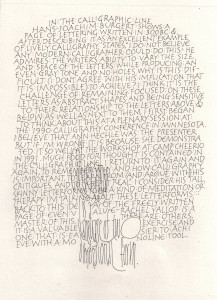 Later, I collaborated with Gail’s team on an installation: My Alaska, Too. I programmed the six-screen interface which pulled in current images of Alaska from the Internet, looping and updating the feed at set intervals. 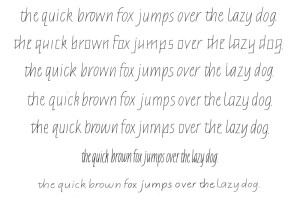 Today’s lettering was done in preparation for teaching a calligraphy class. These italic variations will be part of a handout to help students critique their practice lettering. Variations are as follows: standard italic, 5° slant; italic made up of straight lines to demonstrate both rhythmic underpinnings and the way that the oval is influenced by the stick; low-branching joins (from baseline; high from waistline); high-branching joins (from baseline; low from waistline); a demonstration of inconsistency in shape and branching, but not in width or spacing; condensed italic, half the width of the standard line; expanded italic, written at half the height of the standard line but keeping the width the same.

Mr. Neugebauer taught typography and graphic design in the University of Arts and Industrial Design Linz, a school which was allied with Bauhaus and German Werkbund values. I didn’t know that back then, but I did recognize that this was a very different style of calligraphy. The focus on materials and geometry was apparent even before I understood it Constructivist roots. Even though this book is an instructional book — the subtitle is “An Illustrated Handbook for Lettering” — I regarded the book as inspirational rather than instructional. The beautiful, stylized serifs which characterize Neugebauer’s work was were evident but not explained in the book, or perhaps I missed it because I was so far from ready to understand them. 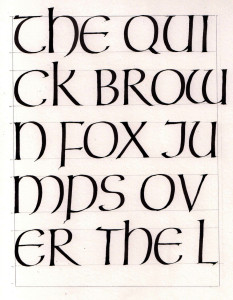 I don’t think I’ve explained that it is my intention to spend at least 30 minutes a day on daily practice. It’s a modest goal, but attainable. When the backlog of holiday-schedule chores abates, I plan to return to my one-hour minimum. Today’s lettering, shown here, is a first copy of Neugebauer’s Uncial exemplar. Although his exemplar is shown at about 11 pen-widths high, I chose to do mine at about 9 pen-widths with a Speedball “C” nib. The slightly flared finials are a Neugebauer trademark; at this size I achieved it with double strokes rather than pressure, which is what I’m sure he did. The horizontal serifs are partially drawn, although with a little practice they could be made with one stroke and some pen twisting.

I have taken several workshops with Ewan over the years, and it is always a wonderful experience. Most recently, at the 2013 calligraphy conference Legacies II in Dallas, Texas, we explored a pseudo-primitive lettering style developed by Ben Shahn. Earlier, in 2003, I also studied “Color and Environment in Artmaking” with Ewan and Hazel Dolby at Camp Cheerio. And before that, in 1990: “Spirituality in Calligraphy” at Calligraphy Connection at St. Johns University in Minnesota.

Ewan Clayton’s recent book entitled The Golden Thread: A History of Writing is a must-read for any calligrapher. If there is a canon of calligraphy literature, this book stands firmly in the center with just a few others. I reviewed this entertaining and educational book in the June 2014 issue of the Guild of BookWorkers Newsletter. 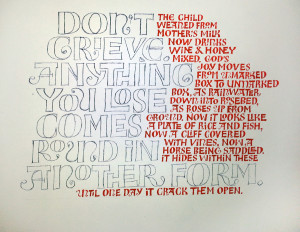 This is a not-very-good image of one of the pieces I did in Ewan’s 2-day class at the 2013 conference. I believe I photographed it with my smartphone while it lay on the floor of the workshop room. 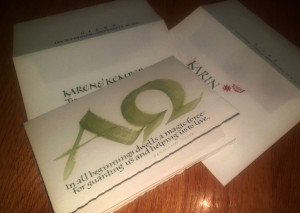