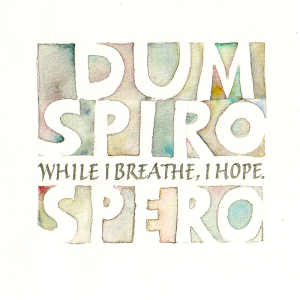 I mentioned earlier that our local calligraphy group has been lettering a quotation on one of ten topics each month. This month we will be deciding how to order and layout the book that we'll bind from prints of these quotations.

Now that we're down to it, there are a couple of the quotations I've done that are sub-par. With the deadline next week, I've been re-doing them. Here's the final version of the quotation on Hope. I enjoyed painting the negative parts of the letters in a fairly spontaneous way.

Gouache with brush and Brause nibs on Arches Text Wove, at 3" square. 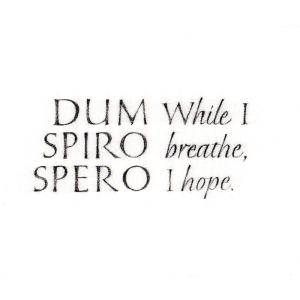 It just doesn't hang together well. It's a good deal larger (about 9" x 12", I think), but it's not good. It needs some vertical element between the two halves of the quotation, but I moved on to something new instead.