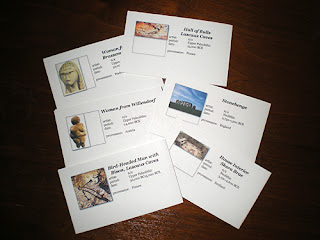 Yesterday I opened up my newly purchased and installed CS3 Suite application InDesign. I've been using Publisher 97 for ... well, since it was new. My Graphic Design class this semester uses InDesign and so I've got to get up to speed on it quickly. My first attempt in InDesign was, oddly enough, on January 1 when I printed the one-page book. That was done in InDesign CS2. Since then the semester has started, and it's been clear that I had to get CS3 in order to be able to work in the classroom on the Mac as well as in my studio on my PC.

Here I killed two birds with one stone, so to speak, by making flashcards in InDesign for my Art History class. I made about 20, although only 6 are shown here.

One Reply to “InDesign on January 13”