Even though it's been on the Internet for 2 years, I've not seen this video of Hermann Zapf until today.

The Art of Hermann Zapf from Johnny Dib on Vimeo.

It must have been filmed 40+ years ago. That paper is luscious, probably handmade. And his pen renditions of type are amazing.

Seen on It's Nice That.

I'm amazed at how bad I am at this game. But I keep playing. 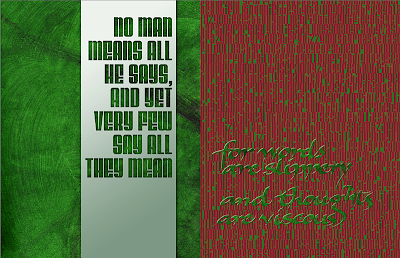 Click on the thumbnail above for a larger image.

Some fun with type punched out over a pasted-painted background, and hand lettering over a wall of Velvenda Cooler type, done for Print Design class. The quotation is from Henry Adams. I'm working toward integrating hand lettering with type. "Toward" being the operative word here. The print version of this has better contrast, by the way, and at 11" x 17" the background type on the right was a more noticeable and readable list of adjectives.

Typography poster completed in class today. I began with the split uncial typeface I've been designing, added a scan of a sheet of vellum and some medieval images of a maze, a sky chart, manuscript illumination, and probably a few other things.
It's part of a continuing exploration of the historical made contemporary. Not as contemporary as I'd hoped, but still interesting to me.

ypography is interesting at the moment: we're designing fonts. I wrote out an uncial font using a Zig scroll marker (first 4 letters shown above), scanned it in, and then vectorized the scan. The resulting paths are too complicated to go into Type Tool, and so I have traced each letter with the pen tool in Illustrator and then imported each into Type Tool. The initial letter of this paragraph has been traced in Illustrator. It's tedious work, but somehow addicting.

We're using Type Tool 2 on the Macs in the computer lab, but I'd like to work at home. I'm using the demo version of Type Tool 3 for the PC (available here). I had been told that there are many free font creation software programs available for the PC, but I haven't been able to find any that are outline-based. I've been through the extensive list Luc Devroye at McGill University has here, with no luck.

I plan to try this again using the alphabet below, written with a metal pen and sumi ink -- I think I could use this scan directly in Illustrator without tracing, because the edges would be sharper and therefore simpler. We'll see. 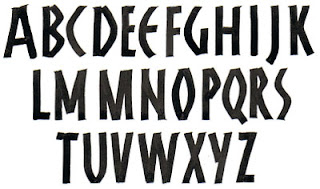 An amusing commercial for the new version of Suitcase Fusion: "BraveFont" --

During the era of handwritten manuscripts, the same tools -- brush and pen, mostly -- were used for both formal and informal lettering systems, and the two systems informed the development of each other. But the tools for printing and writing now differ, and type design has fractured along lines of influence -- influence of tools, culture, and more. The "serious" typefaces become more architectural, and the boutique (for want of a better word) typefaces more gestural but less grounded in traditional form.

I make these sweeping generalizations, and then I realize it's not that simple or discrete; in this article I see many lines of connection between type and handwriting. Do I discern a repetition of rhythm in Nikola Djurek's type design and handwriting. Does Kris Sowersby's handwriting reveal a preoccupation with ligatures that gave rise to the typeface Feijoa? Eduardo Manso's handwriting and type designs share the same lovely openness. Marian Bantjes tweaks her handwriting, not so surprising in a type illustrator; she's a little closer to calligrapher than most type designers. 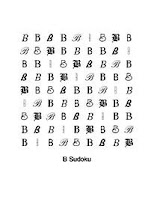 Objet de Carte has a wide range of interesting greeting cards. But the Sudoku-style cards are the ones that fascinate me. Can you imagine trying to work a Sudoku puzzles composed exclusively of the letter B so that each line and each 3x3 square has one of each typeface? It boggles the mind. (I like Boggle too, by the way.)

P.S. And imagine how long it would take to simply write in the answers, never mind all the hints that get penciled in as you're solving. Talk about not being able to read your own handwriting 🙂 "Hmm, let's see, was that a Century B I wrote in there, or a Garamond B?"