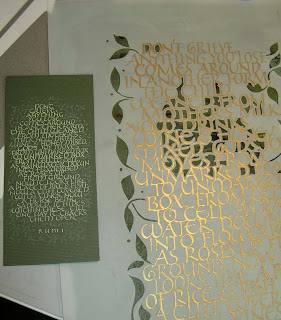 Here is one of my ideas for a cut paper design. The cut paper version will be at least 11″ x 17″; that’s the size of the drafting film upon which I lettered the poem. The idea came from that original scrap on the left (one of those scraps I saved the other day when I was cleaning out the box), which is a bit of calligraphy about 3″ x 6″. The scrap is at least 11 years old. See, I just knew it would come in handy one day!

How this is going to fulfill the requirement that there be foreground, middle ground and background I haven’t worked out yet. I suppose I could make a case that the large leaves are foreground, the lettering middle ground, and the background — which will be also cut paper on a smaller scale and maybe stick out through the large-leaf areas. I don’t know yet.

I bought a 100-pack of #11 X-acto blades about 15 years ago and I still have 3/4 of them in the box, but that’s changing rapidly. Cutting drafting film dulls the blades quickly!